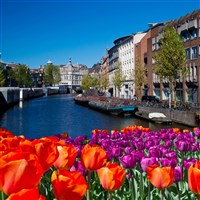 A feast for the senses! With 7 million flower bulbs, Keukenhof Gardens is awash with the sight and scent of blossoming flowers. Plus, a once-in-a-decade World's Fair of horticulture - Floriade, with exhibitions from more than 30 Countries.

Walking through the dazzling spectacle of 7 million bulbs every colour of the rainbow, Tulips, Hyacinths, Daffodils, Orchids, Roses, Carnations, Irises, Lilies, you’ll be overwhelmed by the spectacle of colour and perfume of the flowers. Expansive gardens covering 35 hectares, filled to the brim with flower beds, beautiful landscaping and magnificent floral exhibitions.

As Dutch history goes, Keukenhof is young. Situated on the grounds of a long-razed castle, inhabited during the fifteenth century by a countess whose four husbands (one at a time) included a dauphin of France and a Duke of Gloucester, it was opened a few years after the end of World War II by a group of bulb-growers intent on exhibiting the splendor of Dutch flowers. Did they ever succeed!  Keukenhof had become prestigious enough by 1962 for Queen Juliana and Prince Bernhard to have celebrated their twenty-eighth wedding anniversary on the grounds, with imported royals and heads of state topping the guest list."

A modern "garden city" near Amsterdam that was built on land reclaimed from the sea. The theme of the show will be "Growing Green Cities"-an appropriate motto, given that the site will become a new urban district named 'Hortus' after Floriade shuts down in October 2022.

An international garden and exhibition festival that takes place once every 10 years in the Netherlands, Floriade is a horticultural highlight that is not to be missed. The theme for the 2022 will be ‘Green City of the Future’.

The planning for this colossal event has been underway for some years. Award-winning Dutch architect and urban planner Winy Maas is overseeing the development, which will see almost everything constructed for the show remaining and becoming a part of the legacy of this new urban area.

2022 will be the most urban and green Floriade to date, featuring orchard houses and jasmine flower hotels, a restaurant in a rose garden, a lily pond swimming pool and a city arboretum with a walkway of over 2,000  trees planted according to their botanical name. Botanical contributions in the planting schemes around the site will come from growers all over the world.

Departure Times/Itinerary/Luggage Labels will be forwarded approximately 10 days prior to departure.

We depart early to Dover and a late morning sailing to Calais. We travel through France, Belgium and into the Netherlands, to join the MV Esmeralda in Alkmaar - Porterage Included. Time to settle into our accommodation before Dinner is served in the Restaurant. We moor overnight in Alkmaar, feel free after dinner to wander into the it's beautiful old centre, also known as the 'City of Cheese'

A hearty Buffet breakfast commences our day before we take to the Promenade Deck to enjoy our scenic cruise from Alkmaar to Hoorn, taking in the famous carpet of bulb fields, passing traditional villages and windmills. A 3 Course set lunch is included today. Mid-afternoon, we arrive in the historic port of Hoorn on the Zuider Zee. Head into the old town centre with its magnificent horn-shaped harbour, from which it's named. We moor in Hoorn overnight.

We disemabark after breakfast in Hoorn, and make our way to the most beautiful Spring garden in the World. Keukenhof Gardens opens 8 weeks per year, displaying a staggering 7 million blooms. The site covers 80 acres of dazzling display. This rainbow carpet of flow is a riot of colour, set amongst shimmering lakes, ancient trees, flower shrubs and beautiful water gardens. The Dutch do know a thing or two about tulips - the variety of flower and colours are overwhelming. There are restaurants located within the park.

Late afternoon we re-board the MV Esmeralda, now moored in Zaandam our base for the night.

Today, join us as we head to Floriade. Once every 10 years, somewhere in The Netherlands, a town is transformed into a fabulous festival of flowers. Floriade 2022 World Horticultural Expo takes place in the Dutch town of Almere. Floriade is not only the world's ultimate flower show - spread over five themed zones across an enormous 66 hectares - it is also a celebration of plants, vegetables, fruit and produce. Gardeners from all over the world offer you the opportunity to enjoy the most exquisite and exceptional examples of horticulture found anywhere on Earth.

We reboard the Esmeralda today in Amsterdam. After dinner this evening the bright lights of Amsterdam await. Enjoy a stroll into the lively City Centre.

This morning after breakfast, sadly we must bid farewell to the MV Esmeralda and retrace our steps to Calais for our afternoon sailing to the UK. 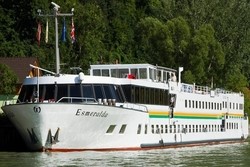 Enjoy the comfortable lounge on the Promenade Deck, sipping a glass of something chilled, or the partially covered Sun Deck that is perfect for relaxation and admiring the stunning scenery. 2 Evenings, enjoy Live Entertainment and the opportunity to take to the Dance Floor.